Led by Central Saint Martins graduate and head designer Manuel Facchini, Italian fashion house Byblos is being given a complete overhaul and rebranding. 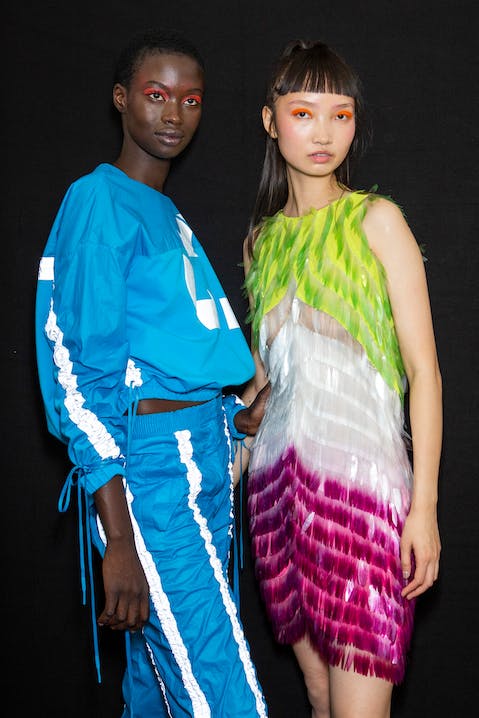 If you’ve never heard of Byblos, you might want to take this opportunity to familiarise yourself with the exuberant Italian label from Milan. Established in 1973, the fashion house was one of the most iconic of its time by the 80s. This led to Prada purchasing the company for a certain period and also Gianni Versace working there as a designer. If you were in, you were in.

But all that changed in the 90s when the sales figures started dwindling and interest in the collections waned. Following a short and steady rise in the 2000s, Byblos is now finally getting the remake it deserves with head designer Manuel Facchini and general manager Enrico Vanzo at the helm.

The current collection entitled #byblosCrystallized stands out with its elaborate handcraftsmanship, flowing, iridescent and reflective materials and three-dimensional patterns, which don’t, however, come out of a 3D printer, but are meticulously constructed by hand. The way the label uses inspiration, cuts and fabrics reminds us of the early masterpieces by Martin Margiela and visionary futurist Paco Rabanne – Manuel Facchini also combines futuristic elements with an architectural composition of materials. Both create a new materiality and refract the light, crystallizing a new dynamic in the process

The fact that the Milanese designer studied at Central Saint Martins in London is also apparent in his innovative and very individual approach to textiles, materials and techniques. Also attracting all the right glances are his sunglasses, which not only reflect UV rays, but also the intelligent construction behind every design.

Byblos is no longer an insider tip but, if you ask us, it’s still not getting the attention it deserves. In the interstellar fashion cosmos of futuristic designs, we predict a bright and golden future for the label, just like Pierre Cardin or Paco Rabanne in the 60s, and are already eagerly anticipating their upcoming summer collection.