Who’s that girl? Madonna is back with a bang (and her alter-ego Madame X)

The enigmatic pop icon is reinventing herself once again this year – but to find out exactly what that means, you’ll have to tune into MTV tonight to watch the world premiere of her album’s first track “Medellín”. 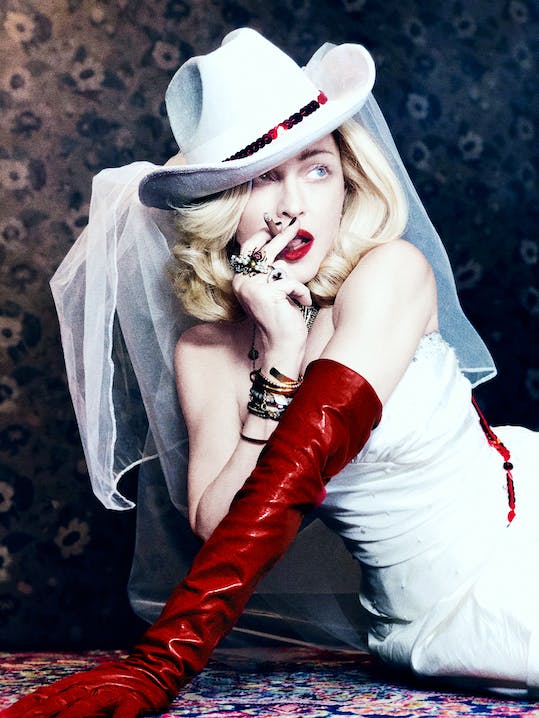 Madonna: A secret agent on a mission

Her latest track “Medellín” has been out on Spotify & Co. for a few days now and if you listen to it, you’ll no doubt also come to the conclusion that it’s a very familiar pop sound with the usual dash of autotune – basically, nothing that will really knock your socks off. But we’re happy to report that, in contrast, the individual teaser snippets on Madonna’s Instagram account look a lot more promising.

They can be classed in the same category as the visually stunning, aesthetically high-quality and very inspired music videos of the artists of our time. In terms of their style and music video storytelling, they remind us of the visuals by Beyoncé for “Lemonade” and the vibe of her sister Solange, who creates living installations with her purist aesthetic, voice and dance ensembles. Madonna is also going down the same road this year and focusing on voiceovers for the teasers, like, for example, Kanye West, who recently performed “Sunday Service” at Coachella, or even Childish Gambino with “This is America”. Although her mission is still unknown, the pop icon seems to be going down the same route this year.

The alter-ego of Madame X:  Madonna as an equestrian, a student, a teacher, a whore, a head of state

If you want to get a better idea of the release, watch the 30-minute live session for the first track “Medellín”: it will be globally televised tonight on music channel MTV as a world premiere, to mark the 30 years of pop culture and history that MTV and Madonna have shared.

For this first single, the queen of reincarnation has teamed up with Colombian reggaeton singer Maluma, known for his seductive, streetwise tracks in Spanish and, according to Rolling Stone, this has already catapulted the duet to the top of the charts in Brazil, as well as in Spain and Italy. But as far as the rest of Europe is concerned, Madonna will have to await the response to her new record.

We should know more tonight from 10 pm, when she unleashes her latest offering on the world – or at the very latest when the Queen of Pop, together with her multiple alter-egos, provides us with new visual or musical highlights in the form of her forthcoming album that is set to be released this June. So it looks like we can expect some brand-new hits this summer – even though, to be honest, we would have been quite happy with old favourites like “Holiday” and “La Isla Bonita” for the rest of our lives.